Interview with the Australian author Graeme Simsion – The Rosie Project

Usually I should start with something along these lines: I just started reading The Rosie Project a few days ago after coming across it in a local book store. I can say I haven't had this much fun reading fiction in a long time. But honestly this would be little more than a blunt lie.

The reason I discovered The Rosie Project is a very different one. I just heard about it a few days ago, at a local book store, after coming across a poster for a reading. I instantly became interested albeit for the wrong reason. I feverishly admire the guy who would read on the night (and have done so for years). Here was my chance to see Robert Stadlober live and in action. I bought tickets online and only then did I start to get interested in The Rosie Project.

When I found out that the author Graeme Simsion is from Melbourne, Victoria, Australia I got even more excited about the reading since he was also going to be present on the night. And what can I say? Graeme Simsion has done an awesome job with analysing and explaining social interactions in a fun way. 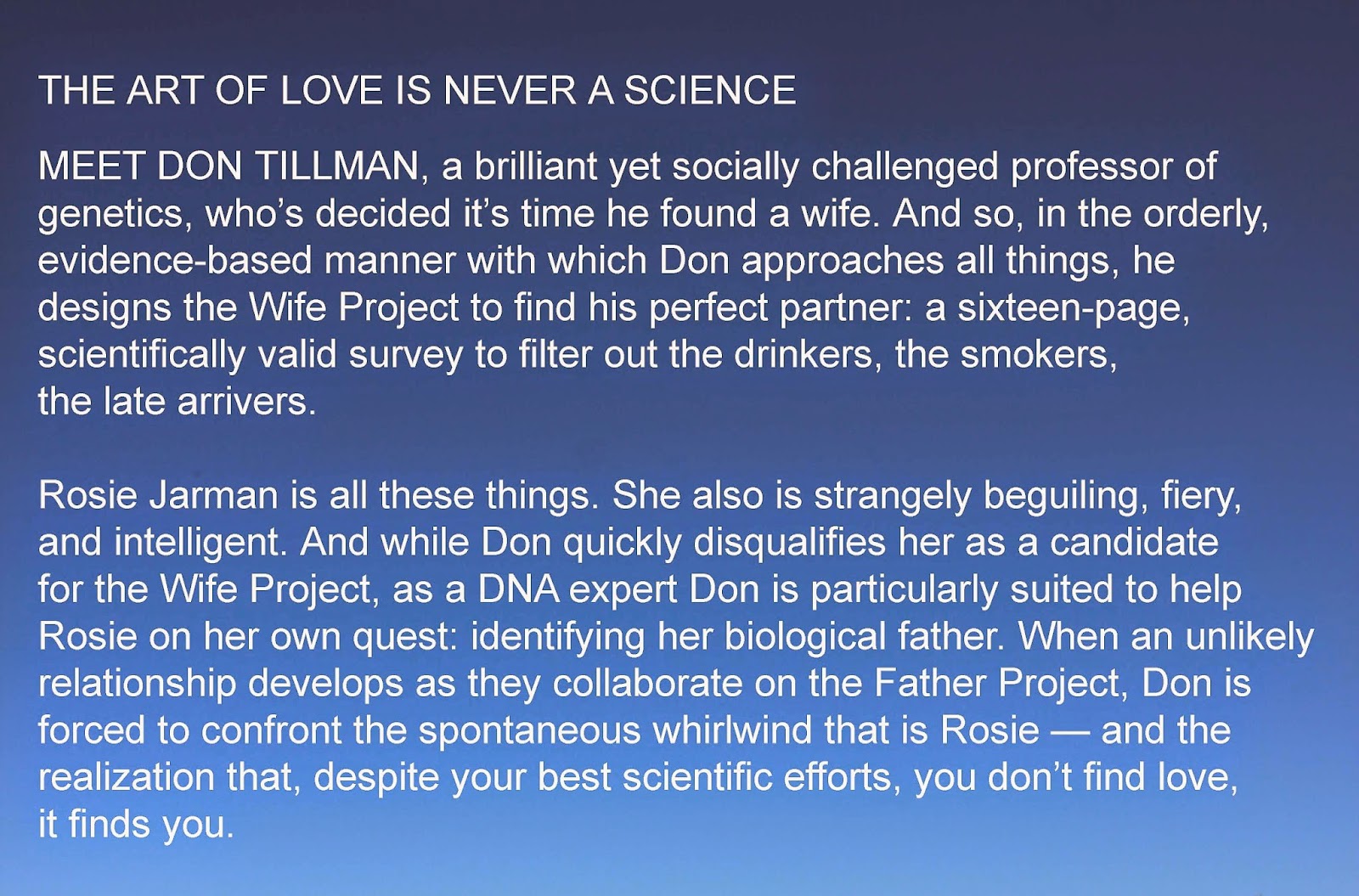 And if the reading would not already have been good enough I was also so lucky to find out what Graeme Simsion likes best in Australia and Melbourne. Pour yourself a glass of Louis Roederer Cristal and enjoy the fine tingling bubble while finding out what it is.

Dorothée Lefering: In 2013 Melbourne was the world's most liveable city for the third year in a row. We both know that Melbourne indeed is an excellent place to call home and I would love to ask you a few questions about this beautiful city. How would you describe Australia and Melbourne to someone who has never been?

Graeme Simsion: A large percentage of Australians live in a small number of big, prosperous, multicultural cities – one of which is Melbourne. The rest are thinly spread over a vast area including desert (the outback) and more fertile rural areas.

So, the choice for visitors is whether to visit the cities or the vast sparsely-populated spaces between – the outback (largely desert), country towns, long coastlines and highways. Of course you can do both. At the risk of offending fellow Australians who see their own city as superior to all others, I would suggest that if time is limited (and it always is – life is finite), visit only a couple of cities. They are not that dissimilar! Spend the rest of the time seeing something of the natural wonders. You can shop in Hamburg…

Graeme Simsion: “Hidden” is a relative term. If you’re a visitor, typically anything outside the central business district and tourist areas is “hidden”. Readings in Lygon St Carlton is well-known and serves the university community with a good literary and Australian selection. And it’s just a few doors from Don Tillman’s favourite drinking establishment – Jimmy Watson’s Wine Bar. If you’re prepared to do a day trip out of Melbourne to visit some of the country towns that grew up in the days of the gold rush, there’s a great old-style bookshop in Castlemaine selling both new and second-hand books. Clunes is officially a “book town” with several second-hand bookshops.

Dorothée Lefering: Where’s the best place to buy treasures for a loved one?

Graeme Simsion: For craft jewellery and other unique stuff, try Brunswick Street in Fitzroy or Acland St in St Kilda. These are both inner suburbs with a range of artisan shops, easily accessible by tram from the city. Around the corner from Brunswick Street, you’ll find Gertrude Street, which has some interesting and not too expensive designer clothes shops. For quality antiques from around the world – especially Russian silver – I have to recommend Roy’s Antiques in Clifton Hill which I part-own! Take the 86 tram.

Dorothée Lefering: The best place in Melbourne to have a coffee and people watch?

Graeme Simsion: It depends what sort of people you want to watch! Melbourne has a long Italian heritage and takes its coffee seriously. I’m a Fitzroy person, and like to drink coffee on Gertrude St at De Clieu (it has a sister restaurant in Carlton called Seven Seeds, near Don Tillman’s university) or at Enoteca which is also a recommended wine bar. Other places for hip crowds are St Kilda, Northcote and Brunswick. There’s a university vibe around Carlton, but the famous Lygon St is dominated by old-style Italian restaurants catering to tourists. Try South Yarra for a more ‘establishment’ vibe (if, for some reason, you want that).

Dorothée Lefering: What is the one food you have to try in Australia and where is the best place to have it?

Graeme Simsion: I’m not going to say kangaroo – though if you find it on the menu, you should definitely try it. It’s not a million miles from beef or perhaps venison. Trouble is, it’s not common on restaurant menus.

When I travel, I like to eat seafood. It varies more from place to place than meat and vegetables, and it’s easy on the jet-lagged stomach. In Melbourne, I’d eat it at Jim’s Greek Tavern. It’s a basic restaurant with no menus (you select from the cabinet or trust the waiter), where you bring your own wine to drink from little glasses with sloping sides. But the grilled whiting is what local fish is all about. Alternatively, opt for a Chinese restaurant and choose mud crab, abalone, or just about any local seafood.

Dorothée Lefering: Where’s the best place to escape the hectic of the city?

Graeme Simsion: Inside my house. But for you, Melbourne is on the sea, and there are beaches very close to the city: on a hot day, they’ll be crowded but at other times they can be remarkably tranquil. I’m not much of a beach person: I like the parks and can take some family pride that my father was the chief town planner for Melbourne in the 1970s and had a strong focus on maintaining parkland. Try the Botanical Gardens or any number of small parks on the outskirts of the city. Or hire a car and head for the country or the coast. You can do a day trip or stay overnight somewhere. Do not go to the Twelve Apostles unless you happen to be driving past it. Tourist city. There are less-hyped places that are as good and closer to Melbourne – and less crowded.

Dorothée Lefering: What is the one place you love visiting over and over again?

Graeme Simsion: My local bar - Enoteca in Gertrude St, Fitzroy or the hard-to-find Everleigh (upstairs) in the same street for cocktails. I’d also recommend a friend’s local bar – Gerald’s Bar in Carlton. I like bars. I do a lot of my shopping at the Victoria Market (as does Don Tillman). That said, it’s overrated as a tourist attraction. I jog along the Yarra River – there’s a long and scenic path – no cars but quite a bit of pedestrian and cycle traffic. My partner and I eat regularly at Añada Restaurant in Fitzroy.

Dorothée Lefering: Can you tell us what your idea of a perfect day in Melbourne is?

Graeme Simsion: A jog along the Yarra River with fog still on the water, coffee in Gertrude St, Fitzroy, ten thousand words of brilliant writing (I’m a writer, remember – that’s what I like doing), tuna sashimi for lunch at a local Japanese restaurant, a glass of Louis Roederer Cristal and beluga caviar with my partner, a phone call with good news from the Man Booker Prize committee, dinner at Vue du Monde where Nick Cave and Bob Dylan are dining and decide to do an impromptu set (Bob lends me a harmonica to join in on his first live performance of Angelina) before an angel appears and gives me the secret of immortality… That wasn’t what you were looking for, was it?

Seriously, I’m a terrible tourist. If what you’re really looking for is advice on how to spend a day in Melbourne, I’d say coffee in the morning and then do something that means something to you – even if it’s not the tourist thing. Maybe it’s the day you eat kangaroo: buy a fillet at the market – hell, get some prawns and abalone too – buy a box of salad and a bottle of Australian wine. Spend the rest of the day looking for AC/DC memorabilia because that’s your thing, find a park with barbeques (I could suggest several, but it’s your project, not mine). Don’t overcook the roo and don’t freak about eating it. Unless you’re a vegetarian of course. Treat it like the first time you ate raw fish or horse (you do eat horse, don’t you?). In short, design your own perfect day. Melbourne’s good for that.

Dorothée Lefering: What’s the best way to get around Melbourne? Car, subway, bike?

Graeme Simsion: Tram. You do need to buy a “Myki” card – available at Seven-Eleven stores amongst other places – but once you have it, the tram network is extensive and serves most of the city and inner suburban locations you’ll want to visit. Route details are available online. I walk quite a bit. It’s a good walking city.

Dorothée Lefering: Thank you so much for your time Graeme Simsion. I wish you all the best for your future projects.

What? You have yet to read the book?

Order the book at Text Publishing

Posted by Dorothée Lefering at 15:50