Some people have got a quite strange and tasteless humour, like the illustrator of these valentine cards. He might be excused since he probably is not aware of what happened in World War Two. Maybe the guy did never think about it. And it might be that no one even told him about the millions of dead civilians, the Holocaust and the up to 70 Million dead people in total as a result of WWII. And he might as well have never even heard of what happened in the rest of the world. It is possible after all and I can't come up with a better reason. 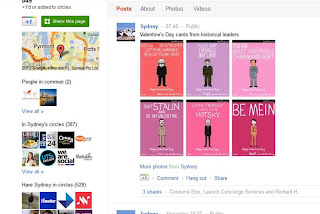 Hard to comprehend is why the Sydney Tourist Office posted it on Google+ and that together with the catchy headline “Valentine's Day cards from historical leaders”.

Cheers from Melbourne!
Posted by Dorothée Lefering at 07:26

Email ThisBlogThis!Share to TwitterShare to FacebookShare to Pinterest
Labels: Kultur, Leben in Australien